Last night the Dining Out Group ate at Hinlay Curry House. between 137 Pillars Hotel and the Flora Condo in Wat Ket, away from the tourist areas.

This place is a family run restaurant  In fact it was only five or six tables set up on a terrace in front of the owner’s house and in a pleasant garden setting.

I ordered Mutton Dopiaza and Aloogogi, with roti, and a large bottle of Leo beer.

The mutton was described a Pakistani curry, with twice the amount of onion and aromatic spices, than other dishes. The owner told me that the meat was New Zealand lamb bought from Macro. It was simply delicious!

The Aloogobi was described as small pieces of diced potato stir fried with small florets of cauliflower in a mild almost dry spiced sauce. Equally delicious!

A most pleasant evening, with famiy type friendly service, and delicious food. The total bill was B288 ( A$10)

Our Group Thanks Steve from City-Now

This is the hot season and it is, well…….Hot! Very hot in fact!

Mai pen rai (never mind); in a month or so it will be the rainy season to bring relief.

Despite my horrible electricity bill (too much use of air-conditioning) there are some compensations.

Poincianas and frangipanis are in full bloom. The Ratchaphruek tree is flowering (Thailand’s national flower). Best of all however mangoes and durians are in season.

My favourite mango variety is nam dok mai, which means water of flowers.

Thais like to eat mangoes green,with sugar and chili powder.

Frangipani on my Morning Walk

Frangapani on my Morning Walk

Ratchaphruek Blooms on my Morning Walk

Ponciana on my Morning Walk 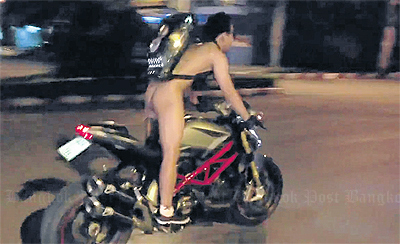 “CHIANG MAI: — A man who brazenly rode a motorcycle through downtown Chiang Mai while naked has been arrested after detectives were alerted to his antics through a video clip on a social media network.

It took five hours for police to swoop on the man after the clip of his raunchy romp appeared on the web yesterday morning. Police arrested Jetpol Chanboontawee, 24, and charged him with committing a lewd act.

Pol Maj Gen Chamnan said police traced the IP address of the person who first posted the clip. That person then identified Mr Jetpol as the naked motorcycle rider.

Mr Jetpol confessed that he was the rider in the clip, which was shot on April 30.

He told police he and his friend had attended a party at a restaurant in the Kad Choeng Doi area and became intoxicated. He was challenged by a friend and offered 1,000 baht to ride his motorcycle naked through the streets.

He said a man in the group, identified only as Bom, was the person who shot the video clip and posted it on Facebook.

Police will summon Mr Bom for questioning. They said he might face charges of violating the Computer Crime Act for posting the clip.

Police fined Mr Jetpol 1,000 baht for committing a lewd act in public and released him.”

What about driving under the influence of alcohol and not wearing a helmut?

This morning’s speaker, in the Convention Room of the Le Meridien Hotel, was from “The Best Friend Burmese Library in Chiang Mai”

The manager of The Best Friend Library , Garrett Kostin, gave the background of this important community centre that works to share information and raise awareness about the current situation in Burma, while also supporting migrants and refugees in Thailand. He shared a 5-minute video about the library and its projects, explained how local expats can make use of the library and get involved, and discussed a bit about Shan and Burmese migrants in Chiang Mai, as well as the future of Burma and the library.

Garret, who is a lucid and interesting speaker, recently returned from a lecture tour of Australia.

He referred to the 1990 election when Aung San Suu Kyi won a landslide victory, but was denied taking office by the military dictatorship. Since then have  been great changes and positive progress in Burma. Within the country, however, she has lost a lot of legitimacy.Some say she does not give enough support to ethnic minorities. Others claim it is simply a ploy to placate the generals and help her  win government at the next election.

Severe anti Muslim intolerance in the country has also developed into conflict between Buddhists and Muslims.

This morning I had an appointment with Dr. Vachiraporn Sujaritwanichpong, a dermatologist, at  the posh new skin clinic on the 5th floor of the Chiang Mail. Ram hospital.

I have seen her several times before. I showed her the surgery I had in Australia.and asked her opinion about the pre cancer spots remaining on my scalp. She said she would not, at this stage,use liquid nitrogen to burn them off. She suggested I treat my scalp with Effudex cream that I brought with me from Oz. There is no urgency about it, so I will start the application in a month or two, because it is unpleasant to use.

I was lucky enough to get a parking space on the 5 th floor.

Reception Staff - Well she does have Clean Feet

The birth, the Enlightment, and the Passing Away of the Buddha

Friday 24th May is Visakha Bucha Day, a public holiday in Thailand.

Because it is a holy day, shops, bars and restaurants are barred from selling alcohol for 24 hours from midnight on Thursday night. Visakha Bucha Day is one of the four annual religious days on which the sale of alcohol is banned

Visakha Bucha Day is one of the most important days in Buddhism because of three important incidents in the life of The Buddha, i.e. the birth, the enlightenment and the passing away, miraculously fall on the same month and date, the Vesak full moon day. .So each year, Buddhists throughout the world gather together to perform the worship to recollect the wisdom, purity and compassion of the Buddha.

Chiang Mai faithful will gather for the annual walk up to Wat Prathat Doi Suthep to make merit before the day, then, on the day they make merit at the Wat. The walk will start from the Kruba Srivichai monument on Huay Kaew Road in the evening of the 23rd of May, with celebrants arriving at the temple at Doi Suthep in the early morning.

Politics in Thailand is never far from the surface.

Yesterday a protest (rally) by the Red Shirts took place at  Ratchaprasong, in one of Bangkok’s prime commercial areas

Although described as peaceful, there was at least one death and scores of injuries.

The following report is from The Nation, one of Thailand’s english language  newspapers. END_OF_DOCUMENT_TOKEN_TO_BE_REPLACED

Billy is a Chan man from Western Burma and learned to cook Italian food from the great Sergio of Buonissimo and Pizza  fame. He and his wife are very welcoming.

For my main course I had grilled lamb leg. A very generous portion served with chips and vegetables.It was delicious!

Because my blood sugar readings have been fine lately, I decided to have a desert. I wish I hadn’t! I ordered Panna cotta which obviously had been frozen and was only partially thawed.

A   small group of only 10 of us enjoyed a pleasant evening.

Photo by Steve at City-Now

Mike Shortland was the guest speaker at last night’s meeting of the Travel Club at the Sangdee Gallery. Mike and his wife have visited Budapest on two occasions.

At the outset Mike said, that in the international sphere, Hungary punched above its weight. particularly on a high learning level.Despite only having a population of 10 million. it has produced 12 Nobel Prize Winners.

Mike said the best way to arrive in Budapest was via the beautiful Keleti railway station. Although Budapest has a good underground system and tram service, he said because of the small size of the mid-city area, and the flat terrain, the best way to explore the city was by walking.

Part of the Audience

Mike’s entertaining address was well illustrated with slides as he explained his experiences in Budapest. They attended an opera performance at the Opera House which is said to have great acoustics. They also  explored book stores, pubs, restaurants, coffee and pastry shops, and spas in in the city.

Mike was fascinated by apartment doors, which seemed to make a statement about the occupants

The impression formed was that Budapest was an affordable destination with friendly locals.

The Danube however is more brown than blue!

An entertaining night hearing about the geography, history, and of course tourism of Budapest.

This morning I resumed my morning walks.

I left the elephant at home.

The skin graft donor site on my thigh (for my scalp) has been very sore. I took off the last dressing about a week ago and since then it has become more comfortable and I was able to walk freely this morning.

I called in to the ATM at the Bangkok Bank at Harbor Mall to cash up. At the Northern Farm shop I bought charolais rib eye steak, some other meat to make stew, and some pig liver.

The Maya construction site at the intersection of the Super Highway and Huay Kaew Road is quite frantic as it becomes obvious that the predicted opening in the third quarter 2013 will not be met. The large construction staff are well served by food stalls.

I must say that I am looking forward to the opening of the complex which is described as a lifestyle mall. It will be great to have so many services in easy walking distance from my apartment.

There are said to be 10 cinema screens, five large and five small theatres with state of the art features.